The Four-Year-Old has been asking questions much more quickly than I can research and answer them. At the moment, my pending questions queue has some 115 questions in it. So in an effort to tame the beast a bit, I’m going to break with my one primary question per Caterpickle routine and deal with several unrelated questions at once.

“Why doesn’t our cat glow in the dark?”

Because she wasn’t born with the glow-in-the-dark jellyfish gene.

“Can we make our cat glow in the dark?”

“How many shots do I need to go to Iceland?”

None. (The Four-Year-Old is up-to-date on her vaccinations, much to her chagrin.)

“Are there dinosaur fossils in Iceland?”

Because the rocks that make up Iceland aren’t old enough. The oldest rocks in Iceland date back to the Miocene epoch (5.3 million – 23 million years ago), a good 40 million years after dinosaurs had disappeared from Earth. 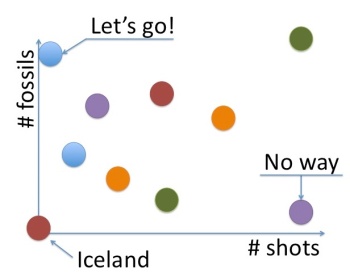 As a bonus, the rocks in Iceland are generally the wrong type. Most are igneous rocks formed by volcanic eruptions. Only 10-15% of them are sedimentary rocks–the kind that can contain fossils.

For those of you keeping track, this means that Iceland fails The Four-Year-Old’s Dinosaur Fossil ROI Per Shot Received calculation (see Figure 1). Guess we won’t be going there this year.

“How old is Rudolph the Red-Nosed Reindeer?”

According to Wikipedia, Rudolph the Red-Nosed Reindeer first appeared in a 1939 story written by Robert L. May. Which means Rudolph will be 72 when he pulls Santa’s sleigh this year.