As you may recall from an earlier post, my daughter loves playing Story Cubes. During a recent bout, she rolled the following: 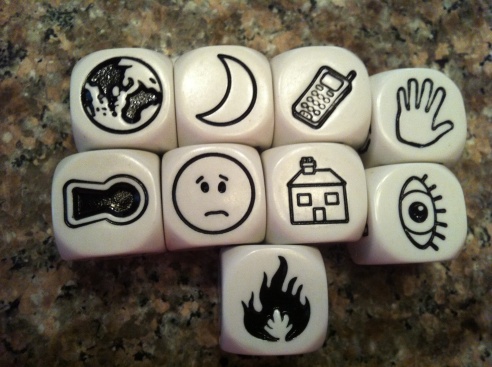 It was only with great difficulty that I kept her from rolling the dice again.

“At least let me fix some of the pictures, Mommyo. These are no good,” she pleaded, but I was having none of it.

She gave me her best angry look, and said, “Well, you can’t make me use them all.”

Having registered her extreme displeasure with the entire exercise, my daughter launched into the following story.

Once upon a time a plane drove around the world,

10 jillion times, and one time it landed on the moon.

It blasted off the moon, and went phut phut phut all through the night. Until it landed on a kitty and said, “Ugh,

that was so gross.”

The plane took the kitty to Mars. He sneezed at the cat. The cat got sick. The cat got Mars Rover disease, which is a very easy disease to fight.

“The End,” my daughter said, looking as belligerent as possible for a little human with rather pale eyebrows. “Now can I roll some better dice?”